My second workshop outside Denmark. We got along in English and the 20 participants (over two days) did very well. Nadelwelt supplied an interpreter on stand-by in case of language difficulties. Someone even had a little exhibition of her work!

The sun shone from a clear sky and the windows looked out on to the fjord. The participants were nevertheless able to concentrate and here are the impressive results of 6½ hours of intensive work.

This was the first time I arranged a workshop myself on home ground. The 12 eager participants came from near and far and the 100 kr. each paid for the 5 hours were donated to help for Syrian refugees.

More hard work, and the result is proudly displayed. A fine flock of colourful princesses shining in the dark of autumn. Just the thing to cheer you up!

It happened again. A flock of eager quilters began to sew princesses, and once more the results were amazing! All fifteen were proud when they went away after 5 hours of intense work.

Princesses make princesses! Some wore crowns, others didn't, but neither does the Crown Princess on an ordinary day... They worked intensly for many hours and gradually these wonderful 'quilts' took form.

The last weekend of September was warm and sunny. Even so, these women chose to stay indoors and produce princesses. And fine they were, after five hours hard work!

On the first spring-like day of the year, in the middle of April, these fascinating women were produced by these lovely ladies. Knivholt Manor Farm was an exciting place to be, both outside and inside. 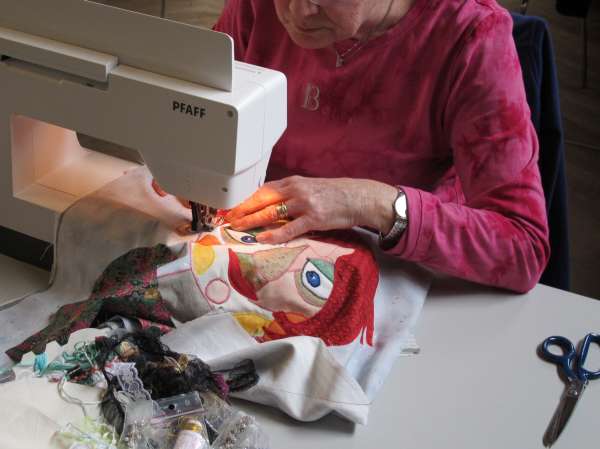 The result of five hours concentrated work on one of the first days of April. Inside it was cosy, outside snow, hail and rain. 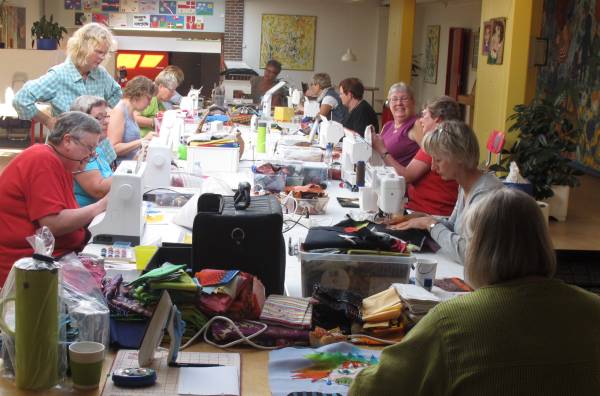 Hard-working quilters at Starup School, near Haderslev, on the hottest October day ever recorded in Denmark, and the result was these fine princesses. 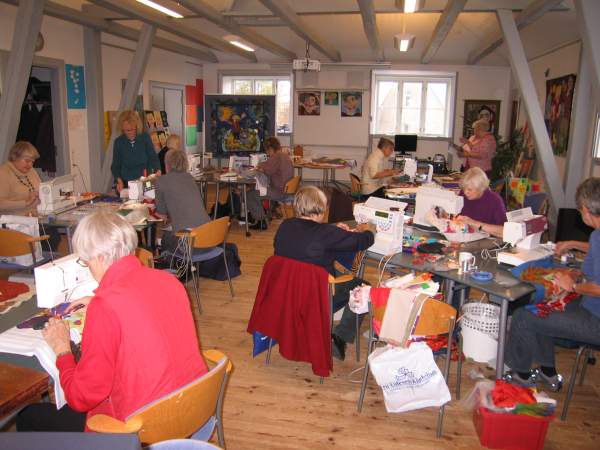 First day. The usual concentration - no time wasted. Outside the sun shone on the town of Birkerød and the trees glowed in autumn colours, perhaps inspiring the choice of hair? 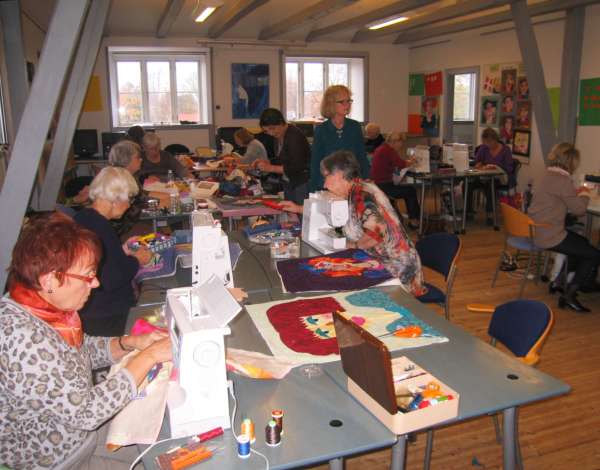 Second day, new class, same concentration as the day before. Overcast outside, but definitely not inside, where everyone enjoyed being allowed to use their fantasy.

A delightfully warm and sunny late-summer day in Gentofte, ten good humoured quilters, and look what they achieved in five hours . . . .  . but it was hard work! 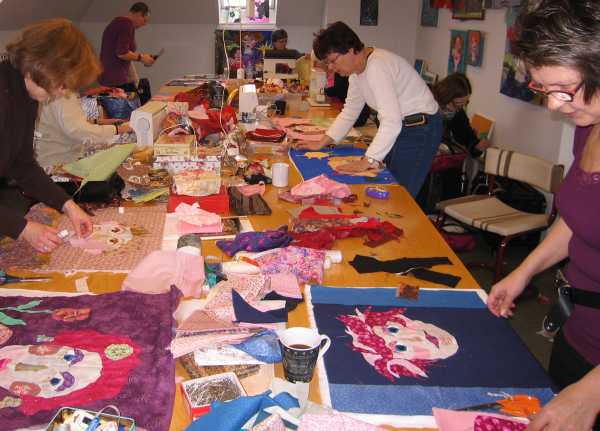 A very productive Sunday. Winter-cold outside, cosy inside, great concentration and a riot of colours.  Grand pictures after only five hours work!
Two months later, some of the finished work. 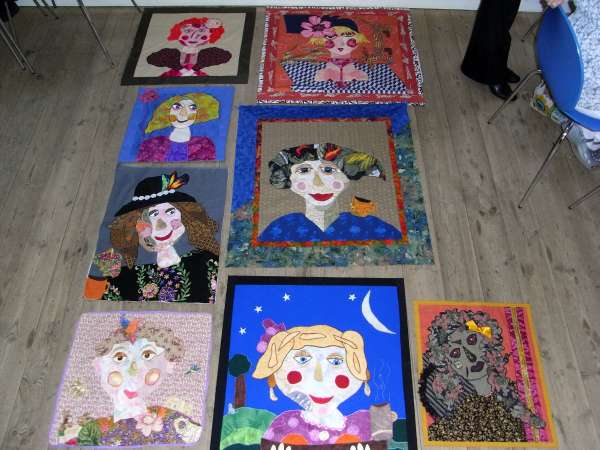 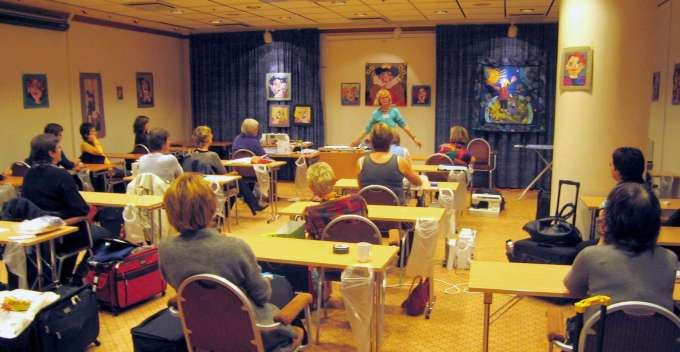 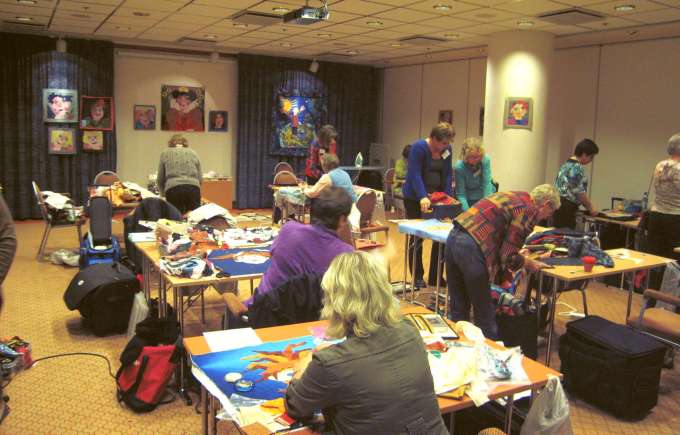 Halfway through and sewing machines still not unpacked

12 hours later and 21 Norwegian princesses are on show,

every bit as different as the participants . . . 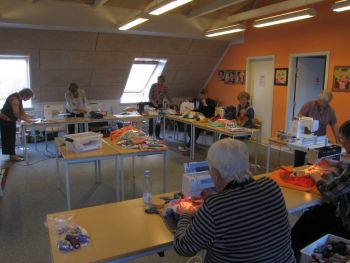 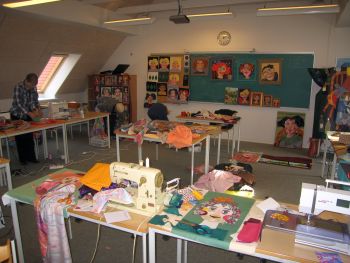 The battlefield at lunchtime

After five hours the work is pinned up for discussion and photography. 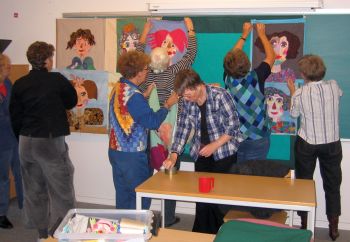 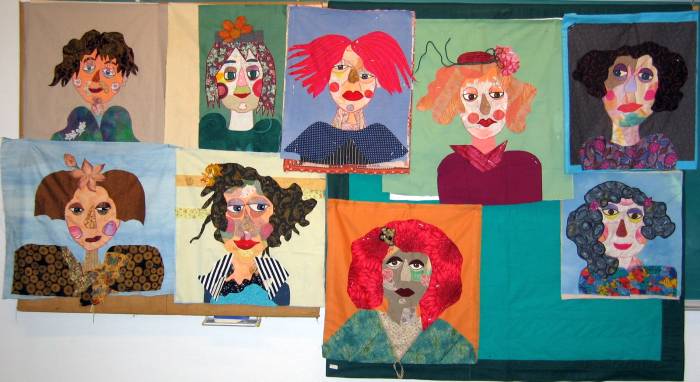 And here they are!